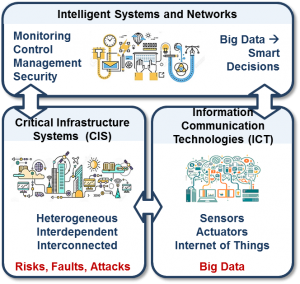 Critical infrastructures are assets or systems, which are essential for the maintenance of vital societal functions. The principal examples are electric power systems, water distribution networks, telecommunication networks, and transportation systems. Without these, other basic infrastructures (e.g., banking, hospitals, schools, tourism, etc.) cannot operate as intended. Critical infrastructures provide the foundation on which communities are built and, when properly functioning, they enable economic growth and social well-being.

As urbanization increases, critical infrastructures worldwide are expanding and are becoming more complex, necessitating greater efficiency and improved capabilities in order to sustain their effective operation. Equipment failures are also occurring more frequently as large segments and components of critical infrastructures become old and outdated. Such failures may lead to serious degradation in performance or, even worse, to cascading overall system failure and breakdown.

Moreover, the safety and security of critical infrastructure systems against malicious attacks (such as denial-of-service) and natural disasters are becoming crucial issues for citizens, businesses, and governments who expect that these infrastructures will provide uninterrupted service 24/7 and under any circumstances. Unexpected events can also occur (accidents, earthquakes etc.) which create emergency conditions requiring immediate response to prevent fatalities and limit damages.

The problem of monitoring, control, management and security of Critical Infrastructures Systems (CIS) will become even more challenging in the future. Currently, an important proportion of the world population lives in urban areas and it is predicted that an even more significant percent of the developing and developed world will be urbanized in the near future. However, existing critical infrastructures were not designed to accommodate such enormous demands. Moreover, due to wide-ranging deregulation, the use of renewable energy and a massive expansion of wireless communications, critical infrastructures, as well as the associated data, software and management systems, are becoming increasingly more heterogeneous, distributed, and inter-dependent making the seamless integration of all components that make up the CIS an immense challenge requiring special research attention.